Another great find on the internet. 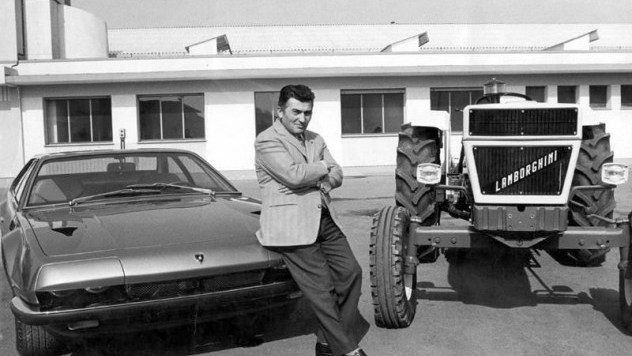 During WWII, Ferruccio Lamborghini was a young mechanic in Italy’s Royal Air Force. Following the war, the enterprising young man capitalized on all the spare military equipment lying about, converting it into farm tractors. Business took off and Lamborghini was soon a rich man, able to pursue his love of sports cars. His collection included Maseratis, Aston Martins, and Ferraris.

This latter brand caused Lamorghini considerable annoyance. He loved his Ferraris, but they had several mechanical issues. Particularly troublesome was the tendency for the clutch to burn out. Examining the problem, Lamorghini found them to be the same clutches he used to operate his tractors. He aired his grievances to Enzo Ferrari himself, who dismissed him out of hand as a simple tractor builder. Insulted, Lamorghini decided to make his own cars.

Automobili Lamborghini was formed in 1963 and began producing cars by the mid 60s. Most of these elite supercars were named after bulls, as Ferruccio was obsessed with the sport of bullfighting. Business declined in the 1970s, and Lamborghini sold off his interest in the company after the calamity of the 1973 oil crisis. Today, the brand is owned by the Volkswagen Group.

When involved in a car accident, no matter whose fault, YOU have the right to choose where your car is taken for repairs.

Your insurance company will be likely to recommend a garage of their choice to you during your claim, however this is usually due to benefits they have in place with these garages (usually involving lower costs to the insurance company).

Unfortunately whilst this benefits your insurance company it won't always benefit you!

REMEMBER, you get to decide who to entrust your car to whilst repairs are being carried out.

ENSURE YOUR CAR GETS THE QUALITY REPAIR IT, AND YOU, DESERVES.